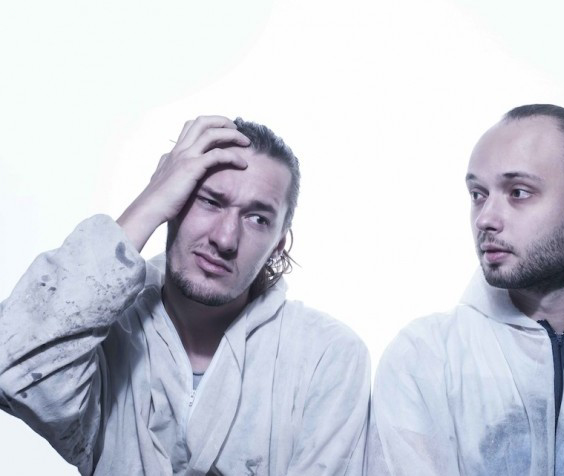 It’s a pretty great honour for any artist to have their work exhibited outside of their home country. It’s an even greater honour when it’s a Russian art collective. Recycle Art Group, then, are in a pretty laudable position given that the collective currently has not one but two exhibitions showing abroad,one in London and the other in Paris. The shows address roughly the same themes, namely the prevalence of social networks in our lives. For duo Andrey Blokhin, 26, and Georgy Kuznetsov, 28, both from the southern city of Krasnodar, social networks such as Facebook and Twitter have replaced religion to become the primary way in which we identify ourselves. The stats speak for themselves: Facebook now has over a billion users, which means that if it were a country, it would be the third largest in the world.

Among the artworks on display at their London exhibition, Last Space Remaining at Gazelli Art House, are a series of ten stone slabs entitled Tablets of the Covenant (2012). The work puns on the modern-day usage of the word tablet — on closer inspection you notice that these old-looking bits of rock are engraved with text from Facebook’s terms and conditions. Taken as a whole, they form a Decalogue, a kind of Ten Commandments for Facebook. Accordingly, those who fail to observe the rules find themselves blocked from the social networking site and, consequently, from a part of theironline existence.

The Paris exhibition at Loft 19 also examines life in the virtual realm. Three of the artworks in the show, holy ID, are “pages” from the Recycle Art Group Facebook account transferred onto Plexiglas and illuminated from behind. “These last projects have been inspired by the process of human communication, which has changed a lot in recent times,” says Kuznetsov. “Real communication has changed to more casual conversations on the internet and visual messages are conveyed via images. Whereas before it used to be ‘Do you remember the event?’ now it’s ‘Do you remember the picture I posted on Instagram?’” Picking up this idea is Battle of Likes. Instagram (2013), a frieze that recalls Roman narrative reliefs. Although an imitation of classical art — the artists mention the Pergamon Altar — the work depicts figures in togas on their mobile phones.

Recycle Art Group’s exploration of the parallels between religion and social networks also resulted in Letter F, a four meter replica of the Facebook logo. Letter F was part of Paradise Network, a 2012 exhibition at the Multimedia Art Museum in Moscow, which contemplated the types of cultural artifacts we might leave behind for future generations. The sheer size of the letter inspires awe, although the concept is also intended to provoke laughter.

“We want to say what is going on in the world in a satirical way,” says Blokhin. “Perhaps sometimes it is rough and direct, but in general our tools are irony and satire.” The work has ensured Recycle Art Group a place on the list of finalists for the main 2013 Kandinsky Prize, one of Russia’s most prestigious art awards; the winner is due to be announced later this year.

The themes running throughout the shows in Moscow, Paris and London encapsulate Recycle Art Group’s style and penchant for dualism: classical versus contemporary art, permanence versus the ephemeral, and the spiritual versus the material. Even their name, Recycle Art Group, is a statement about the level of material waste in today’s throwaway society. It also points to the group’s modus operandi, which involves turning junk into art or recycling familiar, often religious, imagery. Their ongoing critique of consumer culture resulted in a high-profile collaboration with Dior in 2010. The duo created more than a dozen installations for the fashion house including a Dior handbag cast in rubber. The installations are now part of Dior’s permanent collection.

Blokhin and Kuznetsov first met when they were around seven, through their parents, who were also artists. They came to prominence in 2007 when they participated in M’artian Fields, an annual exhibition in Moscow of young artists from Russia and the former Soviet republics. Since then, they have taken part in numerous exhibitions in Russia and abroad, including a collateral event in the 2011 Venice Biennale. Despite travelling regularly for work, they always return to their studio in a Soviet-era former factory in Krasnodar. “The south of Russia is a wonderful region, surrounded by mountains and the sea,” says Blokhin. “It’s important for us as we work outdoors a lot. Nature inspires us with the shapes of its stones and branches. We often make casts of these details and then use them in our work.”

Marrying their love of nature with their current preoccupation with the digital world is Holy Wifi (2013), currently on show at Loft 19. The round faux-stone slab, engraved with the ubiquitous symbol for Wifi, promises entry to the virtual realm. For Blokhin and Kuznetsov, wireless internet functions as a kind of “holy spirit”: by pushing the connect button, users get access to their immortal, online being. Contemplating the future, Kuznetsov says he imagines a space where the human soul will be scanned and sent online. “We know that now technology is investigating the human brain,” he says. “But just imagine if your consciousness could exist without your senses, impressions and feelings? It would totally change our understanding and the substance of reality.”