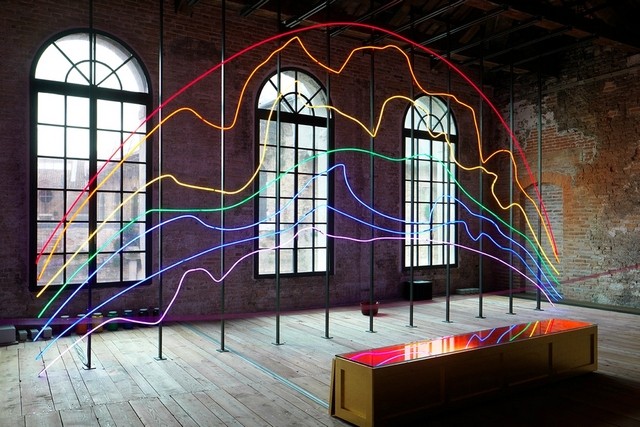 A drawing from three years ago by Iraqi artist Salam Atta Sabri is a one-page grid divided into dozens of smaller grids. In the boxes, there are faces, with tyes looking forward, and familiar landmarks, facades of buildings. The pictures inside pictures are not typical images of a fearful Baghdad under siege, but of its residents enclosed in those grids who peer out dreamily and longingly, reminiscent of scenes imagined by the German artist Paul Klee.

Two walls of the 16th-century Ca’ Dandolo Palace overlooking the Grand Canal in Venice are covered with drawings by the Iraqi ceramicist, 63, who was trained in Iraq and California. Never shown before in public, they are among the revelations in the Iraq Pavilion at the Venice Biennale.

The exhibition’s title, Invisible Beauty, points to the richness of work on view by artists from the Middle East, and to the fact that much of this art, at least in Iraq, goes unseen. Keeping with the theme of invisibility, films by the anonymous Syrian group Abounadarra are also on the programme.

“I wanted to stretch the whole notion of contemporary,” said the Iraqi pavilion’s Belgian curator, Philippe van Cauteren, who operates the S.M.A.K. Contemporary Museum in Ghent. “In Iraq, there are no institutions, there are no curators, there is hardly a gallery scene, he said, standing in rooms showing modernist photographs from the mid-1960s by an Iraqi artist no in his 90s, and images of tortured prisoners taken by a 30-year-old Iraqi refugee now living in Turkey. The pavilion also screens videos by Rabab-Ghazoul, an Iraqi woman who was raised in Wales.

Displacement was as strong a factor as place.

The official Iranian Pavilion, showing artists working inside Iran and abroad, was in a remote working-class neighbourhood where locals displayed drying laundry. It was still a jumbled work in progress when doors opened. Yet Iranians from Tehran and from the country’s diaspora managed to find the improvised industrial shell of galleries and each other. Work ranged from scenes of social life in the palette of the American Edward Hopper painted by Mehrdad Mohebali, to the stately interior of the country’s parliament by the young Mehdi Farhadian, to an ensemble of six photographic self- portraits by the late Sadegh Tirafkan, all seen from behind draped in a bathrobe, some holding a long knife. Tirafkan, who died at the age of 47, lived in Tehran and Toronto.

The Turkish Pavilion, upstairs from that of the UAE in Venice’s Arsenal, offers a twist on the theme of displacement. On view is the work of a single artist, Sarkis, 76, an Armenian born Sarkis Zubanyan in Turkey. With the lights low and neon rainbows at either end of the long space, panels inspired by stained glass illuminate fragments of humanity – the late Hrant Dink (an Armenian newspaper editor murdered in Istanbul in 2007), the burial of Sarkis’s parents, a glimpse of the filmmaker Sergei Parajanov, a lonely woman with her dog in a subway car. The Paris-based Sarkis’s installation comes at a delicate moment: 2015 is the hundredth anniversary of the Armenian mass killings, which Turkey refuses to call a genocide. Turkey’s recognition of the artist and his testimony points to hope for reconciliation.

Hints of the region’s lighter side were found in the group exhibition with a sinister title, In the Eye of the Thunderstorm. Deep inside a maze of spaces in a scaffolded building at the city’s southern embankment, Khaled Hafez of Cairo showed Mirror Sonata for a Temple, his colourful video of millennia of cultural icons in a parade on the screen – satirically muscled men, bulls from Mesopotamian history, elegantly decorated architecture. “I’m tackling forced migration and the struggle between wealth and power,” said the affable Hafez, whose moving picture was an animation of his own painting, Tomb Sonata in Three Military Movements (2010), now at Ayyam Gallery in Dubai. For all its playfulness, his work was a repeating video loop, suggesting no end to cycles of war and displacement.

*The 56th Venice Biennale opens today, May 9, and runs until November 22