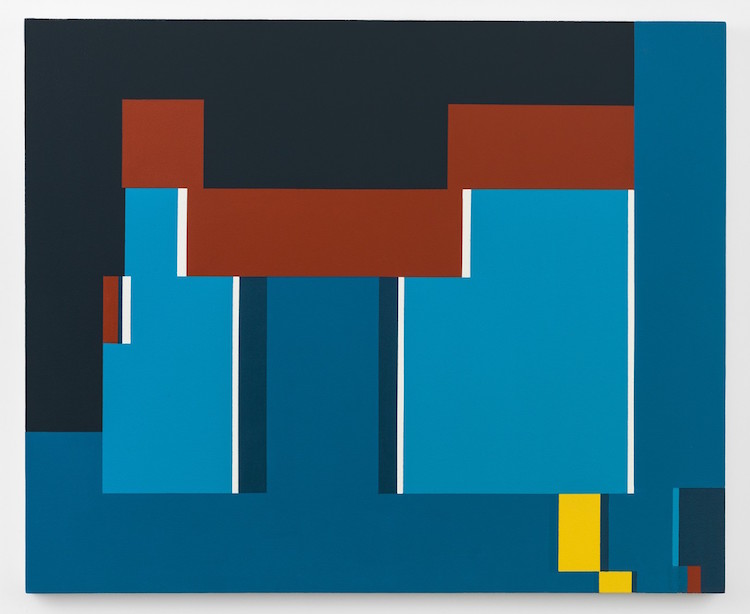 We have a pretty good idea of the ‘Post-Internet’ aesthetic by now, quick recognise the smoothed-out depiction of a reality that is ever so slightly ‘other’ — perhaps the colours pop a little too much or the movement is still a little too stilted to come directly from life. But, how about art that was created just as the digital language began to form, when limited colours and crude pixels filled screens with tessellating blocks?

Born in Greece, the American artist Nassos Daphnis began to work with the newly developing computer aesthetic in the late 80s. Taking a practice that began as an investigation into colour-plane theory in the 50s, Daphnis became interested in early computer graphics, his later paintings appearing to form a bridge between the simplicity of modernist painting and the flat-but-3D nature of early pixellation.

Sitting somewhere between high-art and a game of Snake, these paintings display the jarring colour palettes and awkwardly spaced form that came about from a limited command of technology, as the complexities and details that we now have at our finger tips were just putting down their roots.

New York’s Richard Taittinger Gallery have just opened a series of paintings from the artist in the 80s and 90s, that would have appeared incredibly cutting-edge in their day (and still look pretty rad), offering an insight into the dawning of a new visual language.

Held up by the weight of Daphnis’ prowess as a painter and his life-long investigation into paint, colour and form, these works could pull the viewer into a sense of longing for the past, both of painting itself and technological development. There is a comforting legibility in the language used, a sense of known and understood visual allure.

Beyond this, Pixel Fields hints at the fact that it is possibly the language of the digital world that is evolving faster than that of the art world.