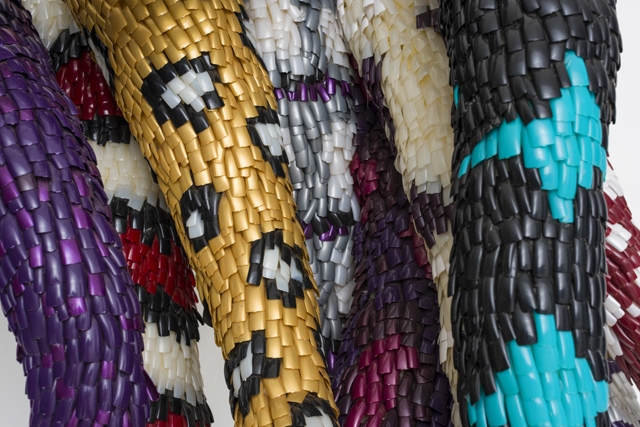 Artist Frances Goodman once spent hours at a time sitting in between naked women’s legs, adorning their vaginas with individual stones (a process also known as “vajazzling”). She was photographing the vajazzled areas for a new series. Unsurprisingly, she says the process was “really intimate.” What was surprising, however, was the women’s response.

“The room became a confessional space,” says Goodman. “People would share more than you’d expect from a complete stranger. When the vajazzling was done, these women had this sudden transformation. As they had their pictures taken, they were strutting around with different poses. Their faces weren’t in the photos, and they could be quite playful.” Instead of feeling exposed or violated, the women enjoyed a nurturing, liberating experience.

Goodman also gained insight from the endeavor. For her, working with other people, especially women, is a way to grow as an artist. “The work becomes less selfish and about ego,” she says. “It’s more about the group.”

Her upcoming show at Richard Taittinger (which opens on February 26 and will be her first with the gallery) centers on similar feminist issues. The title, Rapaciously Yours, asks viewers to reconsider cultural ideas about women.

“Rapacious is a fantastic word,” says Goodman. “It means needy and greedy and assertive and aggressive, all these attributes we’re taught to be embarrassed about. We’re taught not to want. ‘Rapacious’ asserts these characteristics that are only criticized in women, not men.”

Goodman’s clear feminist message will be a welcome addition to Richard Taittinger, where she’s the first female artist on the roster. “I hope I’m the first of many as opposed to the only one,” she says. A South African native based in Johannesburg, Goodman expresses frustration about her country’s gender politics in relation to the art world. She says that 70 percent of South African art students are women, though 70 percent of artists with gallery representation are men. “There’s a skewing,” she says. “There’s still a need for feminism and a voice for what women have to contend with that men don’t.”