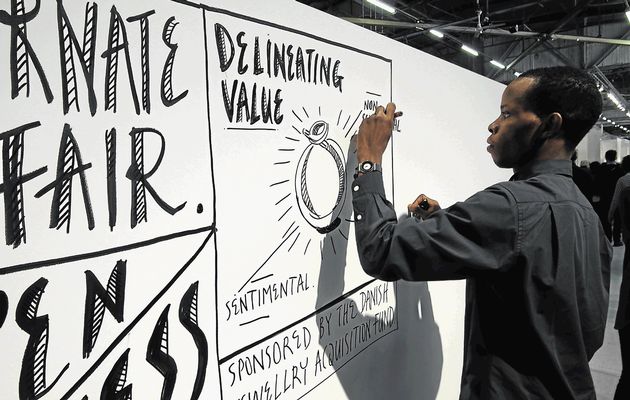 “All so f***ing African,” reads a text panel floating above the melee at the Armory Show, a ritzy art fair held every spring next to New York’s Hudson River.

Inside Piers 92 and 94, where 205 exhibitors from 36 countries had gathered to sell new art, 14 galleries showcased work representative of “contemporary African viewpoints”.

Lebohang Kanye, a 26-year-old photographer who creates digital collages using old and new photographs, caught the eye of Hans-Ulrich Obrist, a celebrity curator and art historian whose choices are closely watched by the international art world.

Sculptor Turiya Magadlela, whose pantyhose paintings secured her the 2015 FNB Art Prize, sold out her presentation in the Blank Projects booth.

Founded in 1968 and based in Harlem, Studio Museum held an important exhibition in 1991 devoted to Harlem Renaissance collagist Romare Bearden.

Jazz was a vital influence on Bearden, as it remains for Sam Nhlengethwa, whose early work was indebted to this masterful American artist.

Speaking alongside Ghanaian sculptor El Anatsui on stage one at the Armory, Nhlengethwa fielded questions about a 1990 collage work he made depicting Steve Biko dead in a prison cell.

Biko made sense to us youth while Nelson Mandela was in jail,” Nhlengethwa said, referring to his student years at Rorke’s Drift in KwaZulu-Natal in 1977.

Beyond the purview of the curated focus section, the Armory also included a raft of galleries showing work from the continent among the world’s top galleries.

They included Goodman Gallery and Stevenson, the latter selling out of its Zanele Muholi editions and all its paintings by Zimbabwean artist Portia Zhavavahera.

Gallery Momo marked its debut on the main fair by showing staged photo portraits by Mary Sibande and Ayana V Jackson, a US artist based in Johannesburg.

Comedian Chris Rock passed through the booth, as did the Studio Museum, which bought a work by Jackson.

Other local artists present at the Armory included William Kentridge and Kay Hassan, whose $300000 collage at Jack Shaman Gallery was a fair conversation point.

Both Frances Goodman and Nicholas Hlobo currently have solo shows in Lower East Side galleries.

Goodman, who is showing sculptures made of car seats and industrial polymers, has found a new fan in Miley Cyrus.

The musician posted on Instagram a photo of a garish pink tongue made with pink nail extensions with this pithy appreciation: “love.”
African Art