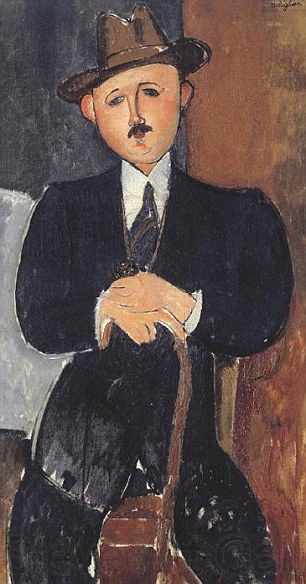 Swiss officials seized the Modigliani painting that the Panama Papers revealed belongs to the Nahmad family of art dealers. The Nazi-looted painting Seated Man with a Cane was seized by prosecutors following a raid on the Geneva freeport.

Artist Oscar Murillo flushes passport down airplane toilet to protest western privilege. During a flight from Hong Kong to Sydney, the art market darling decided that the artwork he’d planned for the Australian city’s biennial wasn’t sufficient, and in a momentary epiphany destroyed his British passport. While he maintains a Colombian passport, officials at the Sydney airport weren’t pleased with the mid-air scene, and deported him.

First Antarctic biennial to launch next spring. Next year, approximately 100 artists will travel to Antarctica by boat and create “temporarily installed and exhibited” artworks along the way. Biennial commissioner, Russian artist Alexander Ponomarev, told The Art Newspaper, “Their constructs are to be portable, designed to withstand relevant weather conditions and cause no hazard to the environment.”

Paris’ Fondation Louis Vuitton building to be transformed into giant kaleidoscope sculpture. French artist Daniel Buren plans to cover the Frank Gehry-designed glass and steel museum with 3,600 pieces of colored glass. “Daniel Buren has designed a grandiose project, pertinent and enchanting,” said foundation president and LVMH CEO Bernard Arnault. “His work responds magnificently to the architecture, in line with his approach, going back to the 1970s, that sees a coming together of colors, transparency and light.”

Bob Dylan to have painting show in New Orleans. The musician, and sometimes painter, will showcase his work at the New Orleans Museum of Art in the show “Bob Dylan: New Orleans,” open from April 22 through July 31.

Critic Robert Storr awarded French Order of Arts and Letters. The former Yale art school dean will be given the prestigious honor on April 17 in Washington, D.C.