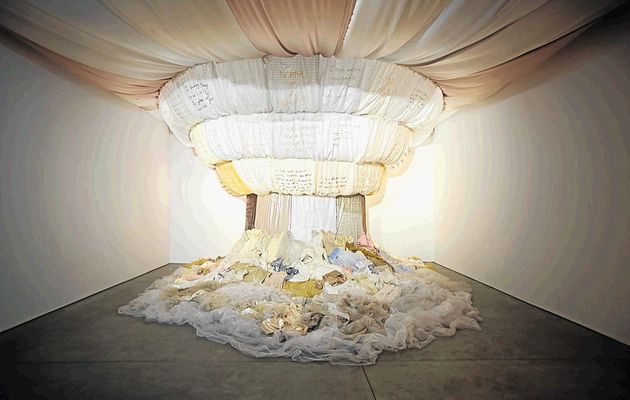 Titled Rapaciously Yours and on view at the Richard Taittinger Gallery in New York, the exhibition comprises nine sculptures and a large sound installation called The Dream.

The latter work is composed of 40 wedding dresses sourced from second-hand stores in Johannesburg. Piled in a heap, they form the base to a billowing, tent-like structure installed at the rear of the gallery.

The fabric installation includes recordings of 40 South African women aged between 20 and 60 discussing the social expectation to marry. Goodman recorded the interviews over three months in 2010 at Wits University.

An earlier version of the work was shown at the Goodman Gallery in Johannesburg shortly after the recordings were first made.

I asked the artist what it was like to be an interviewer, rather than the interviewee, while making The Dream.

“It is a strange space,” conceded Goodman of the interview process. “It starts mimicking friendship. People start talking to you like a friend. I tried to be pretty upfront with people I interviewed.”