ARTNews: ‘It Aims Toward the Universal’: At the 1:54 Contemporary African Art Fair in Red Hook, Brooklyn 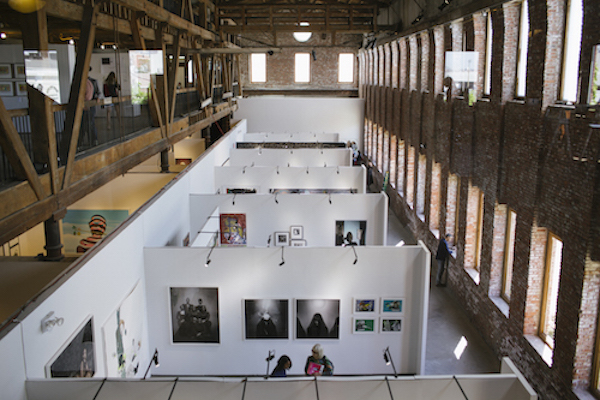 The 1:54 Contemporary African Art Fair has returned for a second go-round at Dustin Yellin’s Pioneer Works in Red Hook, Brooklyn, which is nicely situated at a literal and metaphorical distance from the rest of the Frieze Week action.

Many have no doubt been to Pioneer Works by now – Yellin has a way of working every angle, pulling in disparate groups for concerts, exhibitions, and residencies – but for the uninitiated: it is a 5,000-square-foot former manufacturing warehouse with lofty wood-beamed ceiling, an exposed brick façade, and stark concrete floors. Again, this is a stark contrast from Frieze’s airy tent on Randall’s Island, as well as the scrappy elegance of NADA New York’s booths at Basketball City on Manhattan’s Lower East Side.

It is a modestly sized fair, with just 17 exhibitors. No, that’s not a typo. Just 17. Compare that to the roughly 170 that alight from around the world for Frieze New York or the more than 100 at NADA. It is quite a pleasant change of pace. Among those exhibitors is Madrid’s Sabrina Amrani Gallery, which is sitting right near the entrance to 1:54 and sets the standard for the art on offer within. The gallery is showing the work of Madagascar-born Joel Adrianomearisoa, which ranges from geographically indeterminate aerial photographs to densely scaled-fabric swatches, all in various hues of black. “Infinite possibilities,” said Adrianomearisoa in a statement on his monochromed work. “It is not only a color, but also an attitude…it aims toward the universal.”

More intriguing work comes from Nigerian-born Otobong Nkanga and South African Athi-Parta Ruga, who are being shown by the Parisian gallery In Situ/Fabienne Leclerc. Both make tapestries of various figures, standing within the frame of their woven material. Nkanga’s are mysterious, harboring patterns and symbols, and are relatively restrained. Ruga, on the other hand, makes wildly expressionist tapestries. In Invitation to Exile (2015) a self-portrait of Ruga wearing only a pair of shorts stands at the front of a small wood boat, arms crossed and eyes wide open. Birds are flying in a mad red sky, and the water looks like it could throw him in at any moment.

Elsewhere, at Richard Taittinger Gallery, another South African artist, Frances Goodman, has created a set of giant sequined mosaic replicas of the national currentcy note that features former president Nelson Mandela. Typically presented with the schlocky Che Guevara-esque hagiographic iconography, in this instance Mandela’s legacy is more appropriately framed, in the vein of that well-worn phrase ‘all that glitters is not gold.’

Though neither note been exchanged for good-hard currency as of Thursday afternoon, a Taittinger rep informed me “there was already a lot of interest.” Fair enough. The main fair had opened only the day before and NADA New York was still in its first few hours. The 1:54 Contemporary African Art Fair runs through Sunday, May 8, and then heads to London for a run during Frieze Week there, where it will be open from October 6 to 9.