Trees suspended in space mystique, roots dancing free of ground, branches reaching upwards towards spot lit auras revealing graciously that as it is above so it is below.

That which is hidden is the structure that gives birth to that which is seen.  Jorge Mayet’s solo sculpture exhibition “Broken Landscapes” opened June 23rd at the Richard Taittinger Gallery to an enchanted reception.  There is something transcendent in the atmosphere as the myriad of trees in varying states of foliage and ground float in the air lit so the light is held as an orb of emanation.  It is first seen trees of verdure, full and in transition on islands of land, ejecting from the walls. 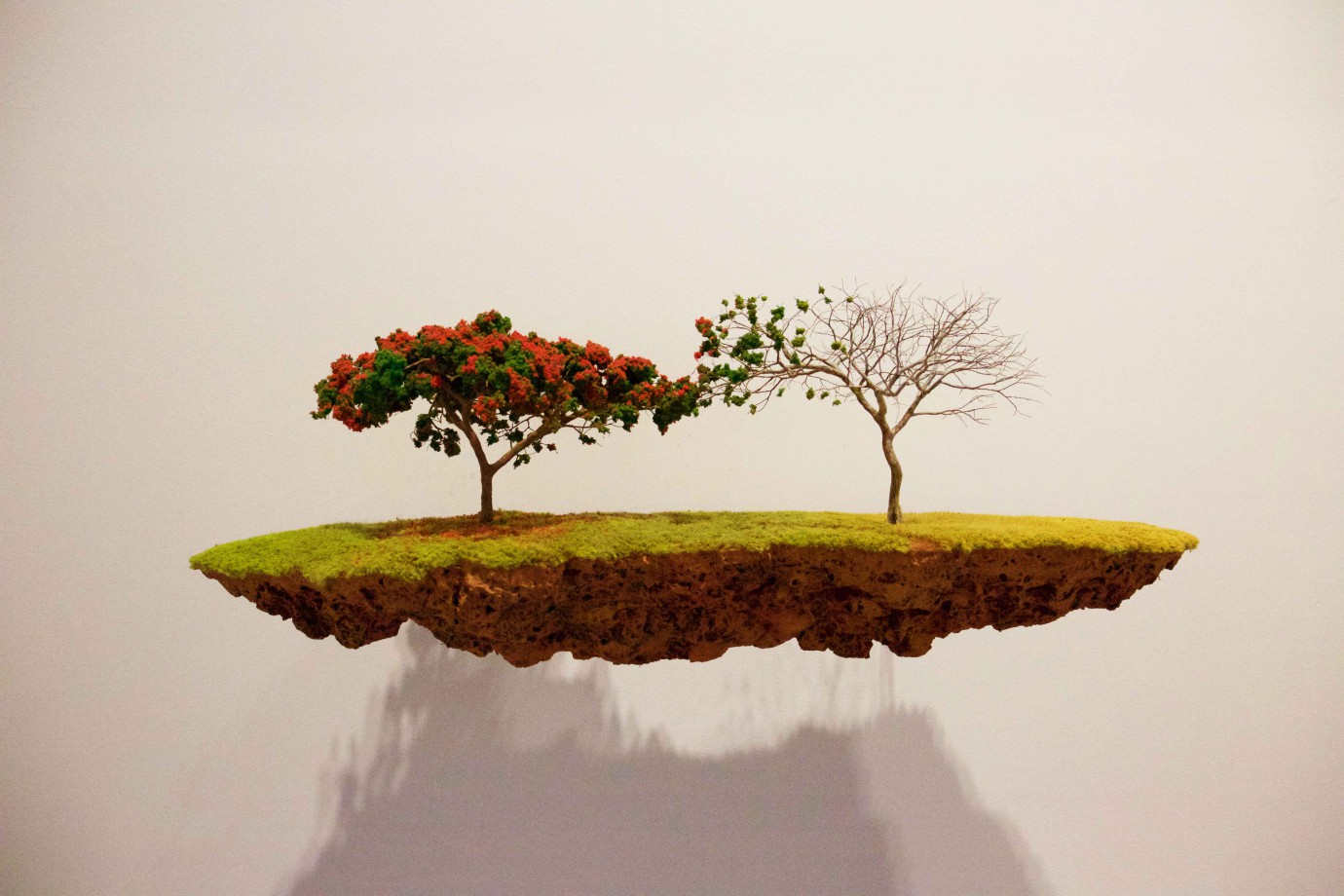 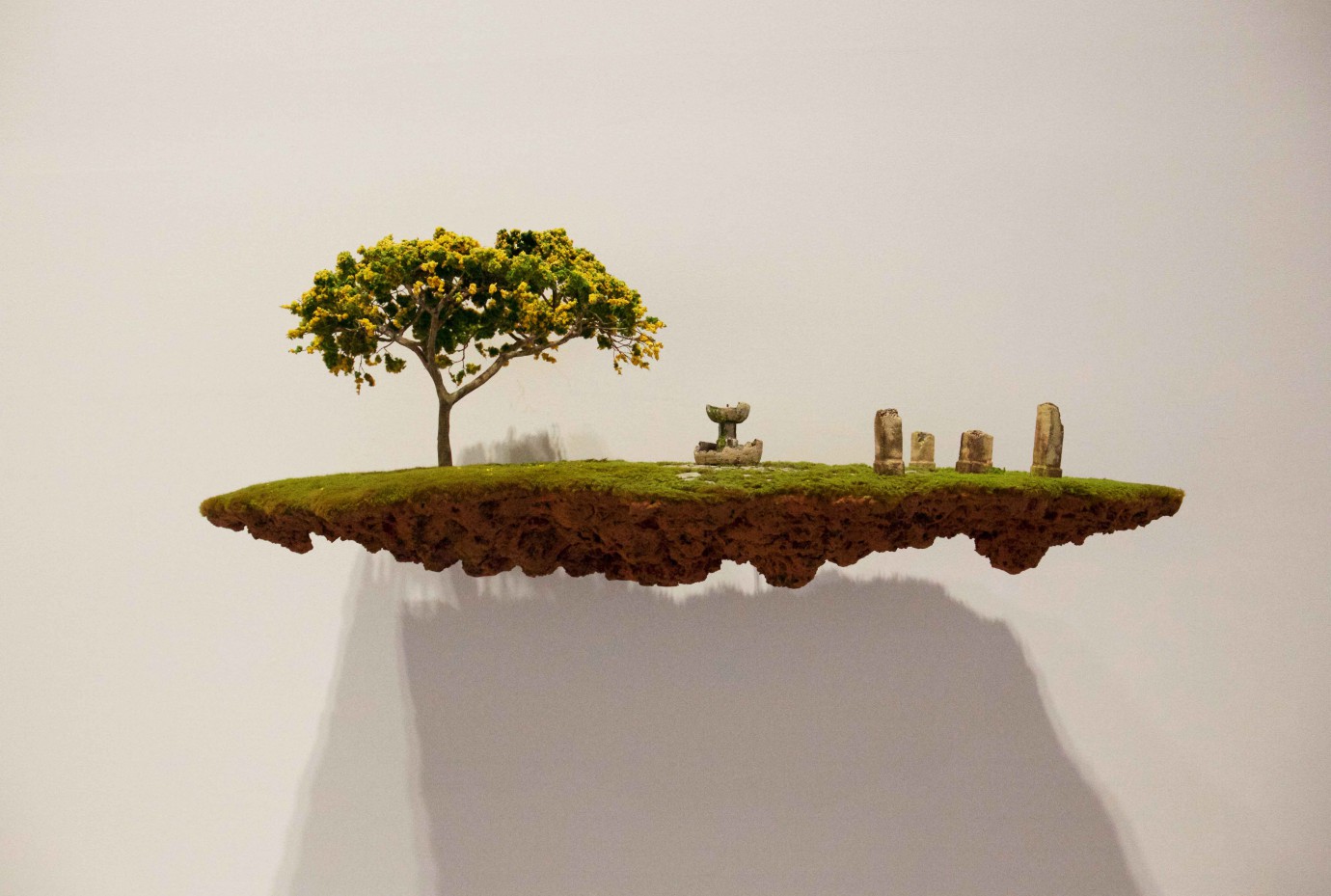 Then the eyes see what appears to be orange dirt or tiny flowers on the floor, and looks up to see hung from the ceiling in the center of the room exposed roots with crumbling ground and branches bare, the message conferred that in a tree, as in ourselves —there is not just the outer layer (that which is seen above the surface of the ground) — there is an entire part of it and you that are in the deep, held in resemblance to this outer layer and that is the very essence – you yourself. 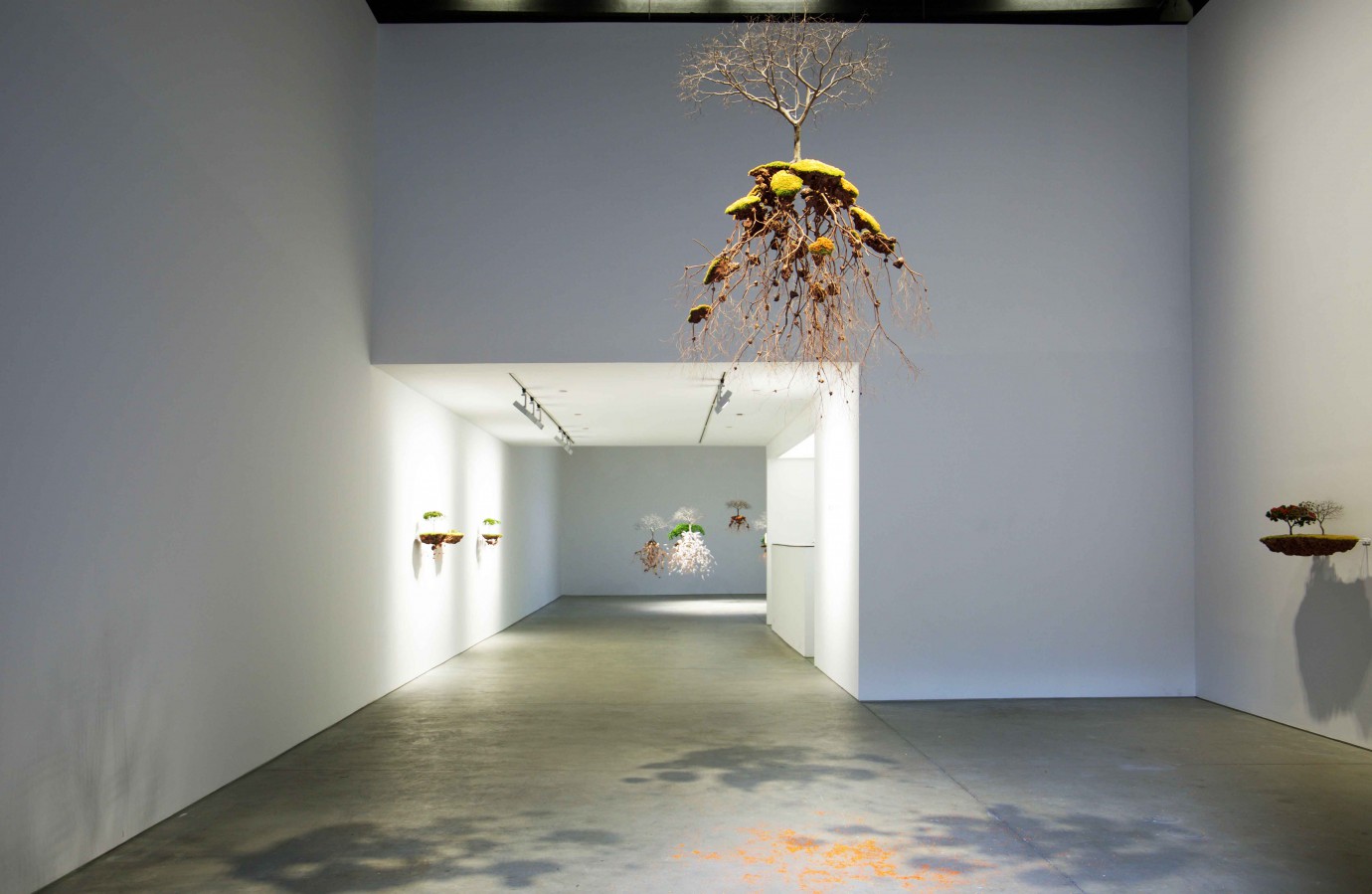 Five o’clock in the morning, a weary body gets up.  Wipes the sleep from the eyes, refocuses the mind.  Enters into the bath that is actually situated outside so that this weary body has to cross a threshold from the dwelling place into another dwelling place just to take a bath, to prepare for the day’s work of what is about to happen.  A journey of breaking landscape — crossing threshold — is the crucial passage that is always about the business of beginning.  Beginning the day, beginning a life..  After morning ritual, enter the field to scatter the seeds of parables, ideas, emotions, ways and sentiments.  The hand that sows seeds is an agent of eternity and sown seeds find nourishment in the land entering into union by burrowing themselves deep into that which takes them — the earth, the womb.  Buried safely in the profound, the seed must now break its shell to expose what is hidden within, the growth of new life.  Through time and patience, through perseverance, hope breaks again the surface as sprout in the other direction revealing for all to see what until then never was.  Then, another process sets in once ground is broken — exposure.  Exposure to the atmosphere, to the environment. What is the atmosphere?  The condition one finds oneself in.  This condition is a protagonist, aiding life, but also an antagonist in the riddle of time — for this seed through opening and giving way to its internal capacity, burrowing deeper into the ground as hope, seeking nourishment in the protection from the womb, draws sustenance from below and passes it above.  The antagonism of time and deterioration above is drawn out by that which is ebullient below, thus through perseverance and patience the fruition of the seed becomes the tree, the tree bears leaves, leaves and fruits, fruits and seeds.  Seeds that bear the stamp of infinite becoming symbolizing the very essence of life, for in the seed all is held — past, present and future — as far back as can be, as far forward as can go and infinitely beyond.

The profundity of Jorge Mayet’s work is that he has captured the entire universe and the essence of life itself in each arboreous vignette.  Made from paper mache, silicon, copper wire and acrylic paint, these master works of patience and dedication mirror the paradigm of the whole of existence; a major world on either side of a point (line) brought into being through desire; a thought that begins smaller than a spec of soil. 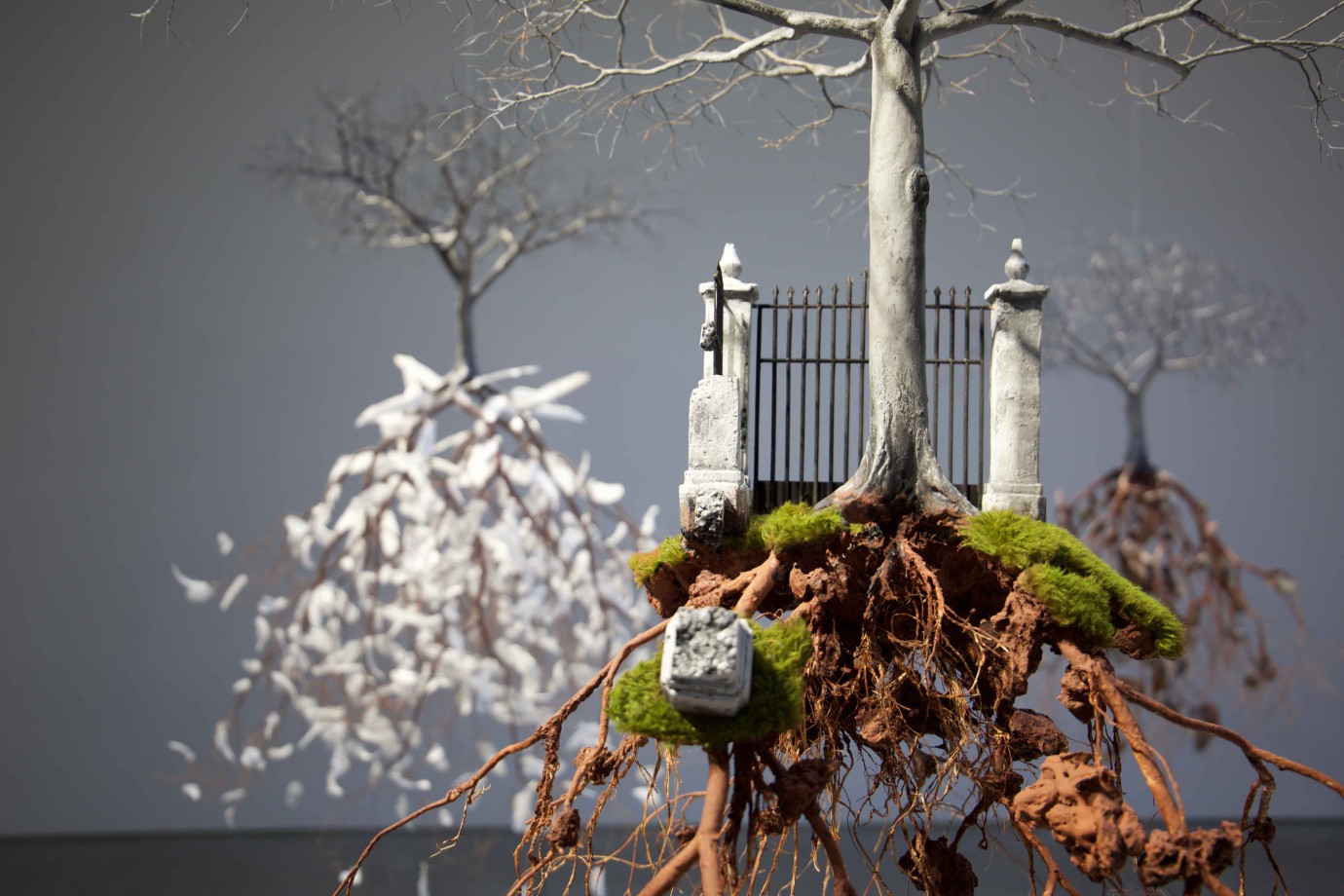 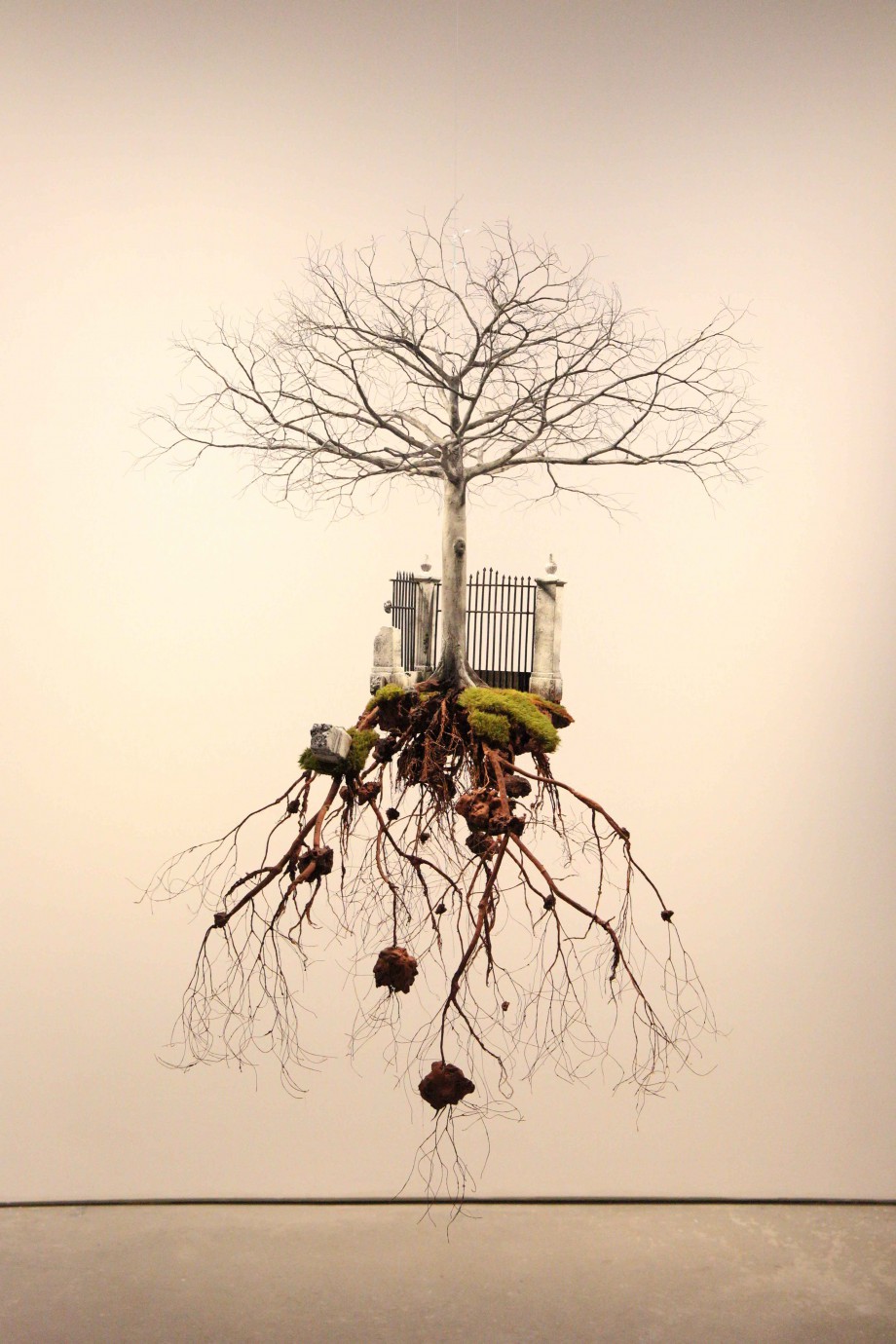 Looking deeply through the lens of meaning one sees not just a tree suspended, but a reflection of the universe itself, infinity borne of a single point with inverted wings that sing the grand story of being.  All this for that single point — a shell, a landscape, a skin, a crust — revealing that what is held within is eternal and once broken through displays that what is above (external) is definitely, truly a reflection of what is below (internal) because when you look at the branches above you see the semblance of leaves that are now not spreading to encompass the atmosphere but diving deep to get to the pearl of nourishment to bring about and sustain life.

Just like a placenta attached by the stem of the umbilical cord to the belly of the baby, the eternal nourishing is promised to the outer representation of the essence of the nourishment; life itself.  As when the sperm entered the egg and union happened and the seed of that union split into two new cells, the very form of that new babe is the very same as that of Mayet’s floating trees. The event horizon is the broken landscape in which the inner turns into the outer and the breaking is actually the encapsulation of the whole entity.  The separation of cells, the separation from the womb, separation from the motherland and on to the journey of life that must necessarily ensue is the crossing of threshold in the morning ritual of life before the sowing begins. The hand that sows seeds is an agent of eternity, branches weave their ways and the stories of their leaves are the stories of our lives.

Jorge Mayet may be speaking to his fellow Cuban diaspora through his expertly rendered references to the sacred Kapok tree with particular memories from the island of his homeland, but he also speaks universally to the living being in us all that is just as beautiful and majestic, just as precious and fragile as the roots and branches separated by that thin landscape, broken by the agency of life and living.  Each scene reveals our eternal potential, our mortal plight, our hopes and dreams lying hidden just beneath the skin — it is our promise fulfilled that transcends the ground, for we too are fed and nourished through the hidden capacity of divine heritage.  Five o’clock in the morning, a weary body gets up.  Wipes the sleep from the eyes, refocuses the mind.  Time to scatter the seeds of another day.