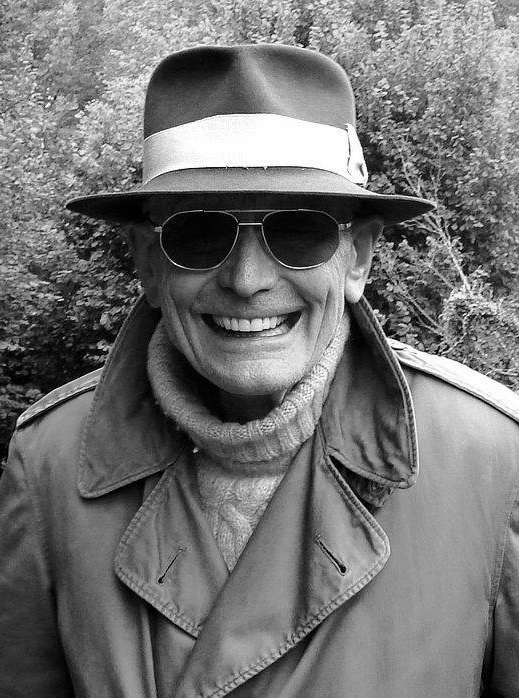 Having the allure of an elegant Hollywood gangster, the artist Jacques Monory presents a selection of works at the Salomon Foundation, near Annecy, of a mise-en-scène that he dearly admires.

Jacques Monory is a painter of blue action scenes and spectacular sequences. In his compositions one may see: murders depicted alongside femmes fatales in luxurious hotels or opera stairs, explosions in the manner of Raoul Walsh in White Heat, or the impact of bullets into fully broken mirrors and heavy clouds of romanticism. The entirety of the show is veiled protectively in Monory’s monochromatic color scheme, in which the artist depicts his dark universe, with which he surely deceives his world. The person who always seems to be shooting or grasping is usually him.

A familiar figure in the French artistic scene, recognized by his signature hats and waistcoats, his dandy gangster style stemming from his admiration of Hollywood and his own work, Jacques Monory paints violence, but of a mild sort. He plays the villains, the heroes; the assailants, and also the reserved. Hardly deterred by his old age (he doesn’t often admit to it, but he’s closer to 80 than 70), he seems at peace with himself and reasonably faces his mitigated success as a “small French painter.” He’s the one that says it, even adding that “it’s reasonably justified, the French have only annoyed the world since the Impressionists, that there then was a reversal of the situation…” He presents a selection of his work at the Salomon Foundation, near Annecy, in a setting that he loves.

How did his first painted “murder” come about? He admits: “I did these murders, in effect, because my wife had left me. I felt as if someone close to me had been murdered. I painted myself as if I had been aggressed in the first composition of the series. We see a woman holding a revolver and on the other side of the torn image caused by the trajectory of the bullet, is myself, shot in the stomach. After, I painted other murders but it was no longer myself.”

The fallen man clutching his stomach, in a cinematographic representation which was well discussed among the French public when it was completed, is Monory himself. This initial figure transforms from target to hostile shooter, laughing, continuously shooting as much as he can in his series “on the Hollywood imbecility, within which I also participate.”

Monory gives here an element of response to his self-portraiture. There are others: “I absolutely want to include myself in life. And because I am the painter, I place myself in my works. Its not terribly satisfying,” he adds. With regards to his recurrent representations of violence, despite the kisses and flowers which are almost always poisoned and typically embedded in his figurative journeys, the straight forward response stems from the artist’s idea of the world. “I find the world very violent. We cannot say the contrary. It has always been, yesterday as it is today.”

And politics? “I have not done many political paintings. It wasn’t in my nature as an artist. There are many that are truly involved with social criticism. But me, what I critique, if there even is criticism in what I do – yes, there is – is the human condition, not the society in which it takes place. We can always say that Bush is an asshole, but even more of an asshole, for those that believe in God, is God the Father. Coming from this, I find that creating politically imbued art is soft. We have to go outside of this…”

Monory voluntarily explains “his nature” as a way to further understand his work: “I am not an abstract painter by nature. This seems impossible to me. In the 50s, when I was a young man, I tried because, if you didn’t create a painting that was even vaguely abstract or surrealist, you were considered mentally incapacitated. The result was monstrous. I destroyed everything. I did a series of reddish works, very morbid, similar to dead skin.” He was already using monochromes without even realizing it. “I was monochromatic, instinctively or naturally.”

To the critic Philippe Piguet, who helped curate this summer’s exposition, Monory has said that natural colors disgust him. “I think I want something from nature, human nature. What accurately represents life does not necessarily satisfy me. I am not at all abstract, but reality doesn’t interest me. I utilize its appearances. I show this through images taken from photography or film, and I make sure to transfigure them into something malevolent or to indicate that they do not exist as this, that this is false, monstrous.”

Monory always works according to photos of others or photos taken from films that he has taken himself. “Photography and film that I photograph myself is a form of possession. I take something I have in my own hands, a reality that has been photographed, that is already wrong and I use this to create something else that is also wrong. I am conscious that I am creating various degrees of falsities. In fact it’s surely to protect myself. Creating paintings influenced by Van Gogh or Rebeyrolle, it’s too much for me.”

Has he ever been tempted to stop painting in favor, for example, of film or writing? More than once, he says, he has painted “the last work.” And then he has painted more. “Otherwise I would have had to die. It would have been nice when I was painting skies. And logical. Moving away from the monogamy of my paintings, I was in a lost movement.”

Death, always death. It is everywhere in the work, and is part of the work. “I think I am extremely afraid of death. Everyone is afraid of it. But me, I have been afraid of it for a long time. In a recent work, I included a character very important to me. I used a photograph of a person taken by a Mexican photographer named Casasola. He worked from 1910 and 1925 in Mexico, at a time where there was plenty of revolution, and people were shot very easily. The photograph was taken seconds before his execution, and he’s laughing and smoking. This makes us think he’s a revolutionary, that he has ideals he supports, but not at all: he’s a little thief. Perhaps he didn’t know how to read, but he had to have understood something to have laughed in the face of death.”