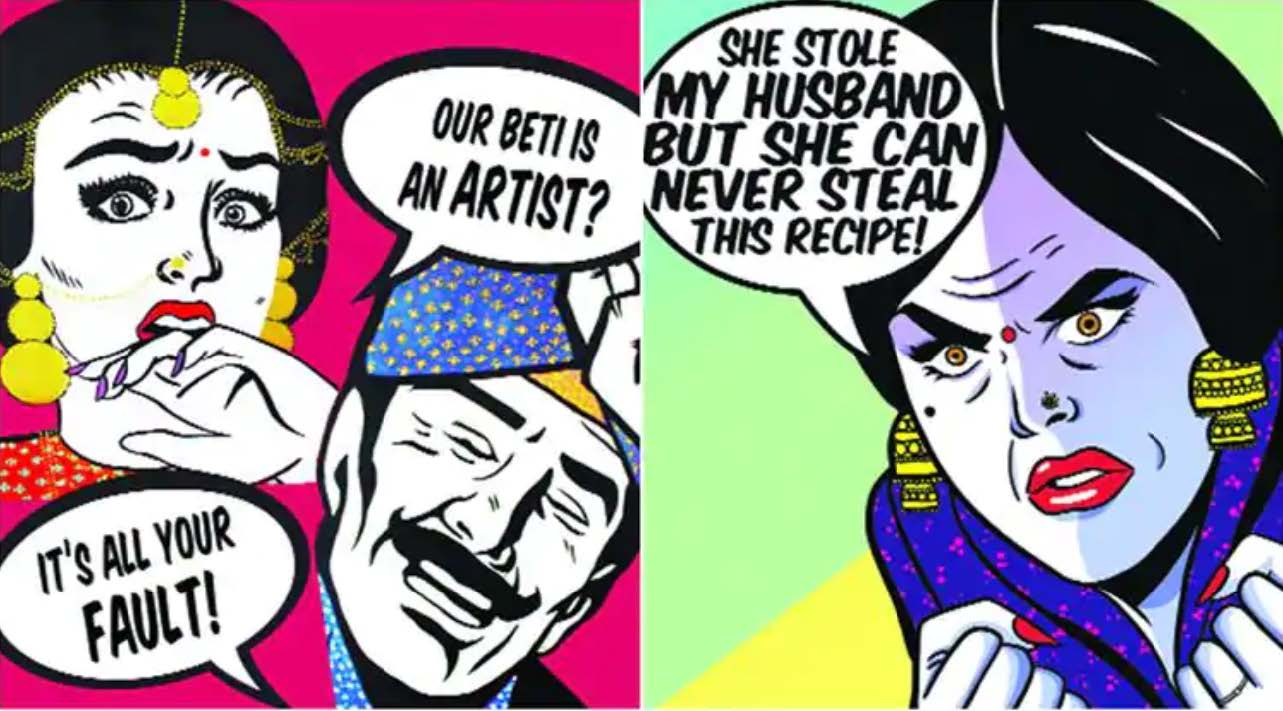 When Maria Qamar moved to Canada from Pakistan as a nine-year-old in 2000, the transition was challenging. At her elementary school, she was picked on for her skin color, her accent, and the smelly food in her lunchbox. While most kids would resort to writing a journal to deal with their feelings, Qamar turned to art-making comic strips in her sketchbook. “I would draw out what happened that day, and give it a happy ending. In real life, I got an egg thrown on my head; in my world, I was getting revenge or having the last laugh,” she says.

Today, Qamar, 26, is known as the artist of Hatecopy — whose Lichtenstein-style posts on desi oddities have racked up over one lakh followers on Instagram and found fans in Mindy Kaling and Lena Dunham. The central characters in Hatecopy are aunties — the judgmental tribe offering unsolicited advice, and the artwork hilariously depicts the struggles of South Asian immigrants in the west. In one, a wife tells her husband that their daughter didn’t pick up the phone and so, is obviously dead. In another, a shocked mother discovers that her “beti is an artist” — her husband says it’s her fault. This one is rather personal.

Despite her talent, Qamar was not allowed to pursue a career in the arts, with her mother even ripping off her drawings from her bedroom wall at one point. She took up advertising in college, and later, got a job as a copywriter. “It was a very sterile environment, with no real room for creativity. I would write jingles I thought sounded punny or quirky and, after 20 rounds of revisions, it would end up as something I didn’t even conceptualize… the work of 20 white dudes in suits,” she says.

After she was laid off from her copywriting job in early 2015, she started working on her art in between looking for other corporate jobs. She drew her first aunty, saying “I burned the rotis”, and put it on Instagram. “Little by little, it became a body of work.” Instagram offered the safe space Maria needed to reclaim her desiness.“The post about throwing a kurta over a crop top to get out of the house is so real. At school, there’d be girls coming in hijabs and taking them off to do their hair and make-up in the washroom. Many would have mini-skirts underneath sweatpants. A lot of the humor is rooted in trauma… girls getting scrutinized for their choices,” says Qamar.