The Teal Mango – How Hatecopy Took Over 2017 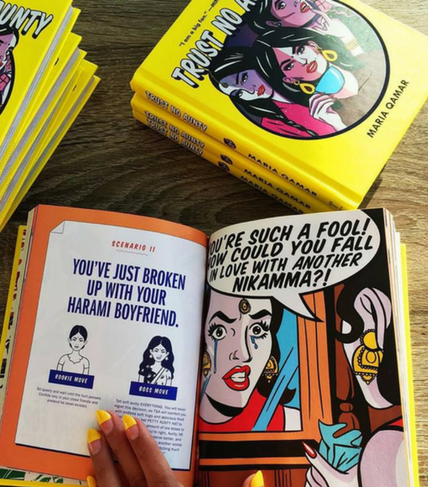 Hatecopy is more than just a dope Instagram page. The illustrator behind the relatable comedic posts, Maria Qamar, has developed a movement with her work. She has brought to life the struggles of the desi woman and built an empire with her artistic talents, working on everything from clothing to Google Doodles!

She blends cultures by representing her “aunty” personas with art inspired by American pop artists Roy Lichtenstein and Andy Warhol. She initially used art to deal with her frustrations regarding bullying at school but it has since turned into a passion. Of course, like all desi parents, her’s weren’t too fond of her love of art so she began with a career in advertising by writing jingles. When she was laid off from her copywriting gig, she was drawing in between looking for another corporate position. She posted an image she drew of an Aunty saying “I burnt the roti’s” and it all started rolling from there. Instagram became a platform to share her art. Slowly, her body of work expanded leading her to develop and build on her brand as time passed and she amassed an ever-growing audience.