Ever since the beginning of the 1990’s and his participation in Documenta 11 (2002) in Kassel and at the Venice Biennale (2005 and 2009), Pascale Marthine Tayou has been known to a broad international public.

His work is characterized by its variability, since he confines himself in his artistic work neither to one medium nor to a particular set of issues. While his themes may be various, they all use the artist himself as a person as their point of departure. Already at the very outset of his career, Pascale Marthine Tayou added an “e” to his first and middle name to give them a feminine ending, thus distancing himself ironically from the importance of artistic authorship and male/female ascriptions.

This holds for any reduction to a specific geographical or cultural origin as well. His works not only mediate in this sense between cultures, or set man and nature in ambivalent relations to each other, but are produced in the knowledge that they are social, cultural, or political constructions. His work is deliberately mobile, elusive of pre-established schema, heterogeneous. It is always closely linked to the idea of travel and of coming into contact with what is other to self, and is so spontaneous that it almost seems casual. The objects, sculptures, installations, drawings and videos produced by Tayou have a recurrent feature in common: they dwell upon an individual moving through the world and exploring the issue of the global village.

And it is in this context that Tayou negociates his African origins – he was born in Nkongsamba, Cameroon, in 1966 – and related expectations. 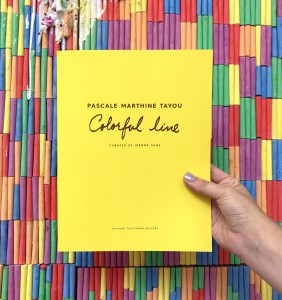 By: Andrew Goldstein Oh, Armory Show. So far away, such lines, the bitter cold wind ripping in from the river, the constant drama… but it’s always more fun than you expect, sales are a-poppin’, and, hey, you get to catch…

By: Galerie Editors The 2019 edition of the storied fair brings together 197 galleries, hailing from 33 countries, including several who were participating for the first time. This year also marked the 25th anniversary of the fair, which began in…

By: Lucy Rees March 7, 2019 On a particularly chilly yet sunny morning, swarms of collectors flocked to The Armory Show, signaling the start of the New York art calendar. The 2019 edition of the storied fair brought together 197…

By Martha Schwendener   The work of the Cameroon-born Pascale Marthine Tayou illustrates the complications of the global art model in which artists adopt a handful of industry-approved elements — found objects, pop culture, some form of political critique —…

By Osman Can Yerebakan   RICHARD TAITTINGER GALLERY | MAY 2 – AUGUST 22, 2018 Tens of branches sprout out of a large white wall, each with a colored plastic bag hung to it at the entrance to Colorful Line,…

Katy Donoghue   On view this summer at Richard Taittinger Gallery in New York is a large survey of Pascale Marthine Tayou, entitled “Colorful Line.” Curated by Jérôme Sans, it is the most comprehensive exhibition of the artist’s work in the U.S. to date….

Paul Laster Curator Jérôme Sans did the talking at Richard Taittinger Gallery on the Lower East Side that same evening. The former director of Beijing’s Ullens Center for Contemporary Art provided a tour of Colorful Line (2 May–22 August 2018), a survey of new and earlier works…