To celebrate Jacques Monory, who is newly represented by Richard Taittinger Gallery, the Gallery is thrilled to present Jacques Monory. Despite his astounding international success, this will be the French artist’s first solo exhibition in the United States.

The show will present a selection of Monory’s paintings from the last four decades. Throughout his prolific career, he has been celebrated as a pioneer of the 1960’s French movement, Narrative Figuration. His work, along with the movement, was developed out of an opposition to the informal painting that typified the era. Not to be mistaken for Pop Art, Monory has said; “What has developed in France has moved away from American Pop Art, we have expressed a critical narrative of society while the Americans have almost always, in my opinion, embraced their system.”

The artist’s numerical painting titles and monochromatic color schemes, typically in his signature blue, act to distinguish his work within the movement. Many of his compositions are both drawn from and embedded with photographs of news media and film. He presents the ephemerality of media as cinematic sequences, occasionally appearing as painterly collages and others in diptychs and triptychs.

Jacques Monory (b. 1924-2018) is a French painter and filmmaker whose work, highly influenced by photography and cinema, is an allegory of the contemporary world with a focus on the violence of everyday reality. His canvases evoke a heavy atmosphere, pulling subject... 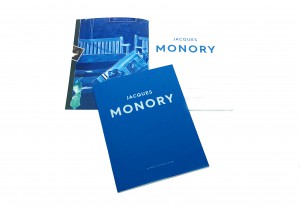 JEAN-PAUL GAVARD-PERRET | FEBRUARY 8, 2018 Evocative of the daily or murderous violence of the world, Jacques Monory’s blue (but sometimes pink) works have, for 40 years, been a faithful reproduction of reality – particularly through traditional and stereotypical images…

Monory and the American night: From photography to painting

Monory and the American night: From photography to painting   JEAN-PAUL GAVARD-PERRET  |  FEBRUARY 8, 2018   Evocative of the world’s deadly or quotidian violence, Jacques Monory’s blue (and sometimes pink) paintings have, for the past 40 years, been…

August 2004 Jacques Monory, set designer of a figurative crime Translated from Geneviève Breerette’s article for Le Monde.   Having the allure of an elegant Hollywood gangster, the artist Jacques Monory presents a selection of works at the Salomon Foundation,…