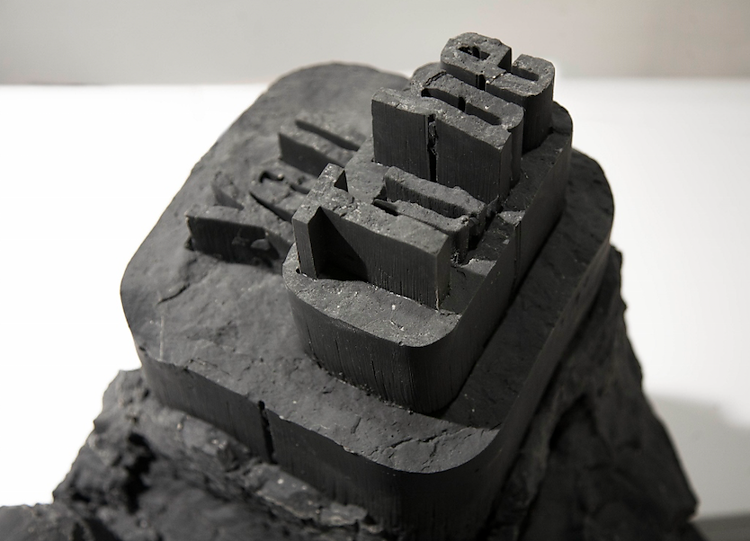 With all of Russia’s recent bad press, its nascent modern art scene frequently gets overlooked. One of the most popular forces spearheading the cultural push is the Recycle Group, a Russian arts collective founded by sculptor Andrey Blokhin and his creative partner Georgy Kuznetsov. Together, their work juxtaposes new media fads and obsessions with traditional religious iconography, the sacred with the silly, a practice which so far has caused the duo much less grief than their fellow country (wo)men in Pussy Riot. One of their most famous projects, Holy WiFi (2013), had the pair carving the ubiquitous Wi-Fi symbol into black marble, and is just one of the many examples in which the group makes distinct comments regarding technology as a new media “higher power.” Their work is also simply just fascinating to look at.

On May 9, the group will take a step deeper into digital religion with an exhibition to be held inside the famed 12th century Sant’Antonin Church as part of the 56th Venice Biennale of Contemporary Art. On display will be one of their most well- known pieces, a towering, totem-like sculpture of the Facebook logo from 2012, which strikes an eerie resemblance to a Christian cross. It’s only fitting then, that the monolithic social media network should be placed inside the Venetian church’s altar.

In Venice, they will also install Connection, which has the Skype logo engraved in wood, along with Enlightener, Meditation, which contains the iTunes notation symbol. Noah’s Ark is a large tree trunk with mobile phone apps carved into its body. Still, while the icons are recognizable, they’re not exact copies. “Otherwise we’d be in court,” explains Blokhin.

They’ve also avoided using Russian social media logos like VR (the Russian Facebook), opting for “global themes,” they say, to reach a larger audience outside of their home country. Unlike some other Russian artists, the Recycle Group is not a threat to the Russian government because they’re not dealing with overt political themes.

These millennial artists, (Blokhin is 27 and Kuznetsov is a ripe 29), are on the forefront of the Russian avant-garde, producing a different kind of critical commentary than the politically charged work of Russian art groups like Voina and the aforementioned Pussy Riot They offer a take on social media networks and net dependency—to the point of worship. They stand in the present, looking back on the digital-obsessed 21st century through the fictitious eyes of archaeologists 500 years in the future.

“We’re working with the virtual world and what we call ‘future archaeology,’” said Blohkin, “which is archaeology of our time and how our civilization will look when it’s taken from the ground.”

In another infamous piece, the group took Facebook’s terms and conditions and turned them into the 10 commandments. As Blokhin told us, if you “sin online, your account will be deleted.”

The group recently opened their first American solo show at the Richard Taittinger Gallery with “Heaven Carrier,” which features Renaissance-style mosaics of people holding cell phones. And coming this fall, they’ll be showing at the Manezh Central Exhibition Hall in Moscow.

Before the internet, the group says, life was about the material and spiritual worlds. Now, a “virtual paradise” must be taken into account. “Before, people went to church to ask questions, now Google answers these questions,” said Blohkin. “The material is like God—it exists but you cannot touch it.”

The Biennale certainly isn’t the first time they’ve created pop-cultural icons with religious motifs, propping them up in sacred institutions. In the past, they’ve put Kenny from South Park into Cathedral-style stained glass windows. But with this project, they ran up against a few challenges working with the church.

“We have some laws from the church we cannot break,” said Blokhin, explaining that they are co-curating their show with the Catholic cardinal.

“If you work in a historical place you must understand its rules,” said Kuznetsov. “Many people don’t understand the things they don’t touch.”

The duo met at age 7 through their artist parents, and began collaborating in their teens. They later moved into the spotlight when their work was featured in the “M’artian Fields” group show in 2007. “Recycle” was the name of their first solo show in Moscow in 2009, and the name stuck. In their practice they frequently use recyclable materials, like resin, rubber, plastic mesh, and plastic, as well as “a recycling of ideas,” said Blokhin. “We use classical ideas.”

They’ve since been living and working in a former Soviet factory studio in Krasdonar, in the south of Russia, occasionally commuting to Moscow. “We live a more provincial life,” said Kuznetsov. “It’s easier in a small city, we don’t spend so much time in traffic.” They also say the nature inspires them, and all their materials are sourced locally.

In September, Recycle Group will have a second studio in Brooklyn. “New York City understands what we want to say,” said Blokhin. And that truly needs no translation.