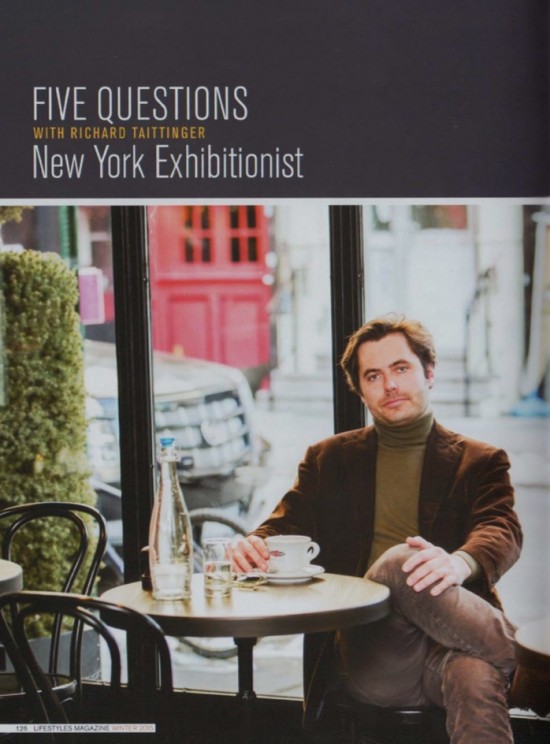 The champagne scion breaks into the Big Apple with a gallery for artists not named Koons or Hirst.

Tell me how you first developed your passion for art

I’ve always had a passion for art, specifically contemporary art. I developed an eye for art and fantasized about being a true collector from an early age. I [had] purchased my first piece of art by the time I was twelve years old. Instead of going to play soccer, I liked going to the auctions at Hotel Drouot for fun. It was like looking for a rare treasure.

The Richard Taittinger Gallery provides a platform for artists who are not well-known in New York. What appealed to you about giving exposure to this group?

It’s not necessarily about artists who are not well-known in New York: it’s about providing exposure. For me, it was necessary to establish a gallery in New York as a supportive platform to show work to a larger audience, an audience that included curators, institutions, and general lovers of art.It was also definitely a reaction to the art market that I’d observed for the last 10 years. There are already very established artists in the Chelsea galleries. New York is increasingly international. As the art capital of the world, and with people traveling here from all over the world, having an international roster in New York, particularly in a new area like the Lower East Side, simply makes sense.

Have you had a favorite exhibition in the gallery so far?

Haluk Akakçe’s Come Midnight, which opened in May of the year. It’s about the rebirth of a major artist who had a difficult time and is now back, bigger than ever. It was also a memorable opening. Come Midnight had no ordinary time frame – we opened at midnight, an the event lasted until 8 A.M.! Even with these odd hours, there was a large crowd of both curious people and supporters waiting to get in. It is very important to be representing [Akakçe] and I look forward to presenting him and his work in Miami for Art Basel. He’s a very hot artist to follow right now.

And now let me tell you about what’s next! Pixel Fields is a fantastic exhibition that will be at the gallery from September 17 to October 25. It is a solo exhibition of works from 1987 to 1992 by Nassos Daphnis, an artist who was represented by the Leo Castello Gallery for forty years. His geometric compositions are actually informed by lines and pixels that he drew on an Atari ST computer. It’s a very exciting project to present the estate of a seminal artist from the 20th century who was such an accomplished abstract painter and pioneer of new media.

How did you get involved with Residency Unlimited? Why is it such an important cause for you?

I met Nathalie Angéles, founder of RU, around four years ago a short time after she founded the organization. We met during a studio visit and I was very impressed with her work. Shortly thereafter, we became dear friends and colleagues. RU is a very wonderful organization that provides support to many international curators and artists in order for them to have a fulfilling residency in New York.

We just did a fantastic summer show, Guess Who’s Coming to Dinner?, curated by Ugochukwu-Smooth C. Nzewi. Smooth is not only the director of Dartmouth College’s Hood Museum of Art, but was co-curator of the 11th edition of the DaKart Biennale. The exhibition featured 12 artist from Africa, many of whom had not shown in the United States before. It was wonderful collaborating with RU to give these artists the opportunity to present their work in the greater audience of New York.

How do you incorporate art into your daily life, outside the gallery?

Art is part of my life all the time – it is not limited to the gallery space. As a collector, gallerist, curator, or artist, you have the chance to meet wonderful people and to travel. When I’m with my family, at home with my wife and children, we love to be surrounded by art. It is much more than a passion – it is a lifestyle.   LM